The Real Don Draper. His Legendary Book–Back in Print! 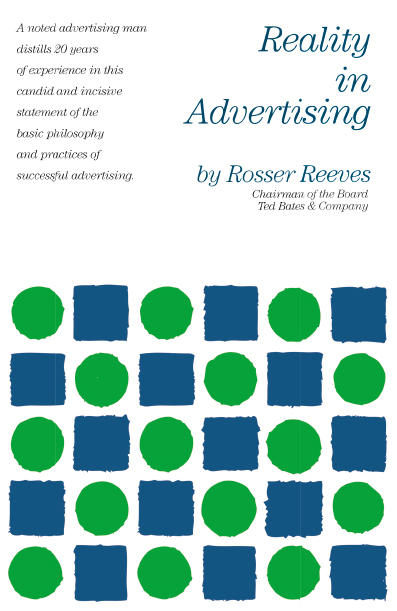 His book is called Reality in Advertising. It was published in 1961 at the height of the Mad Men era by the greatest of them all, Rosser Reeves, Chairman of Ted Bates, NY–the agency that gave us brands with taglines like “Melts in Your Mouth, Not in Your Hand.” Many knowledgeable sources–Wikipedia included, credit Rosser Reeves, a copy writing genius who rose to lead one of the most influential agencies of all time, as the real Don Draper.

It’s the book where Rosser unveiled the art and practice of the U.S.P., the Unique Selling Proposition, the first time anyone had analyzed sales-effective advertising down to a few, practical, repeatable principles. To some, the U.S.P. was as important a breakthrough for advertising as E=MC(2) was for physics. David Ogilvy, President of Ogilvy Mather said he would order a copy for every one of his employees and every client. In fact, Ogilvy himself was Rosser’s brother in law and would tell close friends that he learned everything he knew from Rosser. The book hit the general best seller lists and was reprinted 19 times. It was the foundation for great advertising books that came after like Positioning by Al Ries and Jack Trout. It’s the greatest book on its subject of all time because it explains the nature of communicating the big idea–and it exposes the image peddlers and ’emotion-ists’ who have taken over modern marketing for what they really are– consultants who promote a philosophy of attention-getting creative for its own sake–without any real regard for the product itself or the story that it can tell. Rosser Reeves believed that an ad person’s job was to make the product the most interesting thing in a 30 second commercial. That’s much, much harder than creating 30 seconds of entertainment that’s designed to win applause and awards for the creatives. Making the product difference fascinating is what moves markets, changes buying habits, generates share out of thin air, and motivates millions of people to buy. It’s what marketers used to be paid for.

The greatest advertising and marketing book of all time has been out of print for almost 25 years. But now it’s back. We at BrandTeamSix are proud to say that we have been instrumental in making that happen in conjunction with Rosser’s daughter, Lovejoy Reeves Duryea. She shared amazing stories about her father during the years that he wrote the book and was the master of Madison Avenue. Our special thanks go to her. Now a new generation of students can get access to this amazing little book for the price of a regular paperback or a kindle download. None of the proceeds go to us. We did it for the sake of history and to show a new generation the meaning of truth in marketing.

Buy it on Amazon or Barnes & Noble in Hardcover, Paperback or kindle.